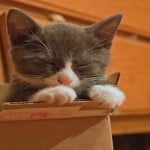 Moving with pets can seem virtually impossible, especially if you own a cat. Most cats don’t like car rides. Getting them into their carrier (or even into the car) can be

virtually impossible. Even if you figure out how to get your feline friend into your new home without getting scratched, Mr. Whiskers is likely to suffer some confusion and depression with his “new territory.”

Follow these tips to make the move as easy as possible.

Getting Your Cat into the Carrier

Start by getting your cat into a single room. This will prevent him from rushing off every time you try to get him into the carrier. Ideally, the room should be empty so there are no places for Mr. Whiskers to hide.

Getting your cat into the carrier can be rather difficult. If your cat is particularly aggressive, you may have only two options:

Driving to Your New Home with Your Cat

Car rides are rather traumatic for cats. Expect your cat to mew and cry for the duration of the trip. Be sure to speak to your cat in a comforting and reassuring tone during the trip. This may help to calm him, but you’ll find that it doesn’t work for long.

It’s not recommended that you allow your cat out of the carrier while driving, unless it’s a longer trip and your cat needs to use the litter box. Most cats will be too worked up during the move to bother using it, though.

Adjusting to the New Home

This is a two-phase process. Start by keeping your cat in a single room for two to three days. This will allow Mr. Whiskers to become familiar with the room. He’ll develop a level of comfort and a feeling of security with it, which will help with the next step.

After the third day, allow your cat to roam freely through your home. He’s unlikely to venture too far from his new “home base,” and will retreat rather quickly at the first sign of danger. As time goes on, your cat will become more and more comfortable with his new surroundings. Eventually, he’ll be right back to his old self.

While it’s debatable, many experts claim that a cat’s long-term memory only lasts about six months. Whether this is true or not, it seems that most cats have fully adjusted to major changes (such as a move) within three to six months.

Help your cat ease into the transition by maintaining as many of the same routines from your old home as possible. If your new home is bigger, you’ll find your cat relatively pleased with his new digs.